An essay by Philippa Bernard and David Brand, first published in “The Czech Memorial Scrolls Centre: A Historical Account” 1988 (abridged for the MST website)

When I asked David Brand how it was that he became a sofer (scribe), he told me that he was born a sofer. The ancient and honourable profession was frequently passed down by fathers who instructed their sons in the intricate and scholarly traditions which govern the writing, restoration and conservation of the Law of Moses as inscribed in the Sefer Torah – the Book of the Law. 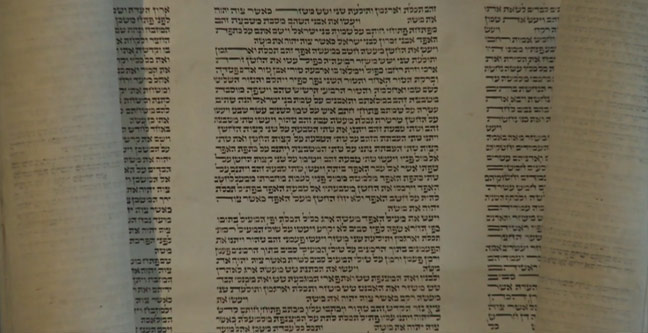 Little has changed since the days of Ezra, to whom is attributed the distinction of being the first of the scribes. In biblical times the scribes were not only the writers of the Hebrew code and its accompanying traditions, but were learned men who also interpreted the law, pronounced on religious questions and, together with the Pharisees, led their people in their endeavour to understand and fulfil the word of God. Today a sofer is honoured as he has always been, but most of his work is confined to the repair and maintenance of existing Scrolls of the Law. When a new scroll is received by a community it is welcomed with great rejoicing; and where old traditions survive there is dancing in the streets through which it is borne to its new home. The last lines of a new Sefer Torah are traditionally left blank by the scribe so that members of the community for whom it is destined can perform the mitzvah (good deed) of writing in a word or two of the remaining text.

When the 1,564 Czech scrolls arrived in London in February, 1964, it was clear that most of them would require much attention before they could be made available for synagogue use. A few months later David Brand called at Kent House in Knightsbridge, where Westminster Synagogue had its home and asked if any work was available for an experienced scribe:  little did he expect to find enough work to occupy him for more than twenty years! The Brand family made their home at various times in Israel, Paris and New York as well as in London, for the scribe’s profession is in its nature somewhat nomadic. Where scrolls need repair, there must the wandering sofer rest, to move on again when the work is completed. Seldom can a scribe have found so large a task as that which confronted Mr. Brand.

A Sefer Torah which is in perfect order, and meets all the requirements ordained by custom for use in prayer, is deemed to be kasher, “fit”, a word also applied to permitted food; both circumstances relate to the pursuit of holiness according to ancient ritual. A kasher scroll is one that contains not a single error, and meets the other traditional requirements and all the rules relating to the dimensions and style of the calligraphy carefully observed.

The writing itself forms pages, or columns, and each piece of parchment has margins on both sides that are even. To align the ends of the lines letters may be extended in width but not otherwise enlarged; the column width is that taken up by three times the longest word in the Hebrew text:  l’mishpachotechem (to your family). The effect of these conventions is that whilst the overall size of a Torah scroll varies in accordance with the size of the lettering and the top and bottom margins, the proportions remain always the same.

The breaks in the writing indicate the verses into which the text is divided; some are open breaks leaving the line uncompleted; others are breaks within the line. In the narration of the five books of the Torah, ten special letters are to be written larger than the rest. One is bet, the first letter of the very first word of the Hebrew bible:  B’reshit – In the beginning. Six letters are written smaller than the rest and six must appear at the beginning of a column. At the very end of the scroll the last line must always be a full line.

No marks of any kind may be made on the parchment other than the written text, so in order to set out the page neatly and to preserve straight lines and correct spacing, a small wheel of regular spokes is used; this is run over the sheet to define the line spaces and each point marked by the spoke is linked by a faint line ruled with a sharp knife; a pencil may not be used.

The equipment used by the scribe is also of great ritual importance. Each scribe either makes his own or purchases what he needs, usually from Israel. The ink, which must be very clear and black if it is to last for hundreds of years, is made from tree galls which are boiled and mixed with gum arabic and a preservative. The pen is a quill of sufficient strength and width usually from the feather of a goose. It is soaked for some hours in water to make it sufficiently malleable to be cut and shaped. The point must be sharp enough for the finest script with the side of the tip slanted and smoothed for broader strokes. The pen inevitably becomes blunt as it is used, and after several sharpenings it must be discarded and another made.

Other tools used by the scribe are readily available. He needs a fine awl to pierce the parchment for stitching, a strong steel needle to take the gut thread, and most important of all a very sharp knife. Errors of transcription, damage to the parchment or smudging of the lettering must all be rectified according to the strictest and most meticulous rules.

The work of the sofer is aimed at achieving as nearly perfect a result as possible. The purity of the parchment must be visible round every letter, with none touching the text. No stain or mark may appear anywhere, and corrections must be made in such a way as to be almost undetectable. The name of God is treated with the greatest reverence; it must always be written in one attempt, with no interruption “though the king himself should come into the room”. If any mistake is made in the writing of the divine name, the whole part must be cut out and rewritten. This is done by removing that section of parchment which offends and replacing it with another. The edges of both the new piece and the body of the work are chamfered down to match each other and the new piece glued in. A similar technique is used to replace any other damaged portion, and the final result is almost invisible to the naked eye. The glue used in this process is also made by the scribe. He boils small pieces of cow skin until they dissolve into a clear liquid which hardens when cold. Water is added and it is then warmed gently over a candle flame to be used and re-used whenever needed.

Whilst the strictest rules apply to the correction of errors made in the course of writing a scroll, an area of script which has been damaged or stained later is regarded more leniently. It too must be immaculately repaired, but it is sufficient for the surface to be gently scraped away, dusted with powdered chalk and rewritten. Repairs must cover whole letters or preferably words; individual letters must not be interrupted for repair.

The scrolls themselves varied greatly in size; some were neat and small with tiny script of immaculate elegance, others were so heavy that they could hardly be lifted; these were possibly of Russian origin, says Mr. Brand, where “the men are big and strong”.

When the scrolls were first examined at Kent House, it was realised that much work outside the scope of a scribe would be needed; the wooden rollers round which the parchment is wound, and the binders which secure the wound scroll, also needed close attention. The wooden rollers are known as Etz Chaim (tree of life). Many were severely damaged in the destruction of the Czech synagogues, and some were much worn by constant use. Vestiges of painted decoration, gleams of metal adornment, traces of Hebrew inscriptions were faintly decipherable. A skilled craftsman was needed to put into usable order the scrolls that Mr. Brand had repaired. For many years the scrolls committee was fortunate in having the services of Mr. Frank Jones; he was no less a craftsman than Mr. Brand in his field. Under his care strong wooden racks were built to support the scrolls as they were examined, carefully numbered to correspond with the available information about their origin. Wood was burnished, metal polished and the rollers rendered strong and firm to carry their traditional burden. Sadly Mr. Jones died before he could complete his task, but his place was taken by a young cabinet-maker from Brighton, who also felt privileged to work on the project.

The binders wrapped around the scrolls were of great variety; silk, cotton, velvet, wool – all had to be examined, washed and pressed. They proved to be of such interest that a researcher from the Hebrew University in Jerusalem came to London to investigate the collection.

In 1988 Philippa Bernard shared with us Sofer Brand’s vision of sofrut – the work of a scribe. There is some division in the Jewish community regarding whether or not women are permitted to write a Torah scroll for ritual use. While women are free from the obligation of writing a Torah, this does not necessarily mean that they are forbidden to write one. The Memorial Scrolls Trust is proud to work with a traditionally-trained soferet (female scribe) as part of our scribal team.